There is a statement that elicits either eye rolls or inner-child giddiness from parents.

I’m in the former camp, and remain mildly bemused when I encounter a peer who professes excitement at the prospect of a week in the theme park capital of the world.

To my mind anything that claims to be the Happiest Place on Earth must, by definition of trying too hard, be miserable. I’m deeply suspicious of corporate bull and few places take commercial evangelism to the level of a Disney theme park. Even the addition of Darth Vader to the stable of characters can’t strike a blow against Disney’s collective celebration of the Light side.

When my wife suggested we go to Florida I sucked it up. Actually, I sucked it down; the taste of bile that reached into the back of my throat.

Logically it was the right thing to do. Disney is a rite of passage for a child. My kids are too young to appreciate a Spring Break mountain biking in Moab, and they will probably never be into prolonging winter by snowshoeing between the Appalachian Mountain Club huts in the White Mountains of New Hampshire.

So, yes I would go to Florida, that great flat featureless landscape, beset by fickle spring weather and overflowing with families in matching shirts. Still, I had my limits:

When my wife sent me a link from her XX in Tech group suggesting ways to maximize your theme park experience it fell firmly in the void between acquiescence and enthusiasm.

It withered in my inbox and she never bought it up again. We defaulted to our accustomed roles: I cheap out and procrastinate until she spends money to make the experience more rewarding. Besides with her interest in applied technology tackling the Disney Fast Pass system was a natural fit.

My wife and our friend worked the Disney app to such great advantage we managed to knock off the Magic Kingdom in a day. My advice to you would be to read the FAQ. This saved us a few hours of queued aggravation and we spent the extra day visiting Disney’s Hollywood Studios. The rides were a little more adventurous and the Indiana Jones and car stunt shows were great.

On our third day it was Universal’s Islands of Adventure. Universal’s Express Pass was a steeper price than we wanted to pay, but not having it definitely reduced the enjoyment. 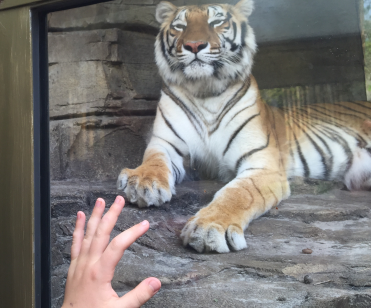 After Orlando we visited St. Petersburg Beach and on our last day in the Tampa area we went to Busch Gardens. Of all the theme parks that was the one I enjoyed the most. The rides were better suited to older kids and the integration with the zoo worked… mostly. One felt for the gazelles, who had a Cheetah Hunt rollercoaster screaming above their enclosure, but like humans living next to a railway they seemed habituated to noise. The glass viewing-box in the middle of the tiger enclosure was really cool.

As for the thousand pound gorilla in the Theme Park world; while the magic bands and Fast Pass are great innovations, overall I felt parts of Disney World needed an update. Maintaining It’s a Small World in its original form is fine, it has a nostalgic value, but Space Mountain was completely underwhelming. Surely they have the technology to make it feel like the rider is being hurtled through space? In the world of vibrant Hubble telescope imagery scattering a few weak light bulbs in the walls doesn’t pass for a stellar experience anymore.

I advertised my status as one who prefers the road less travelled to those journeying this most beaten of paths by wearing my Bandit Snow White holding an Apple logo t-shirt. The meaning of image is rather ambiguous, although it is safe to say it was not a licensed product. Whenever, I wear it I usually get compliments from strangers. But not here in the most crowded place on earth. No one said a thing. They were too busy asking the organized people where they got their customized Disney Family Adventure 2016 t-shirts printed.

It was enough to confirm the suspicion that Disney was not really my cup of tea.

But once I was spinning in a giant teacup, my daughter squealing in delight beside me, I have to admit, it I rather liked it.